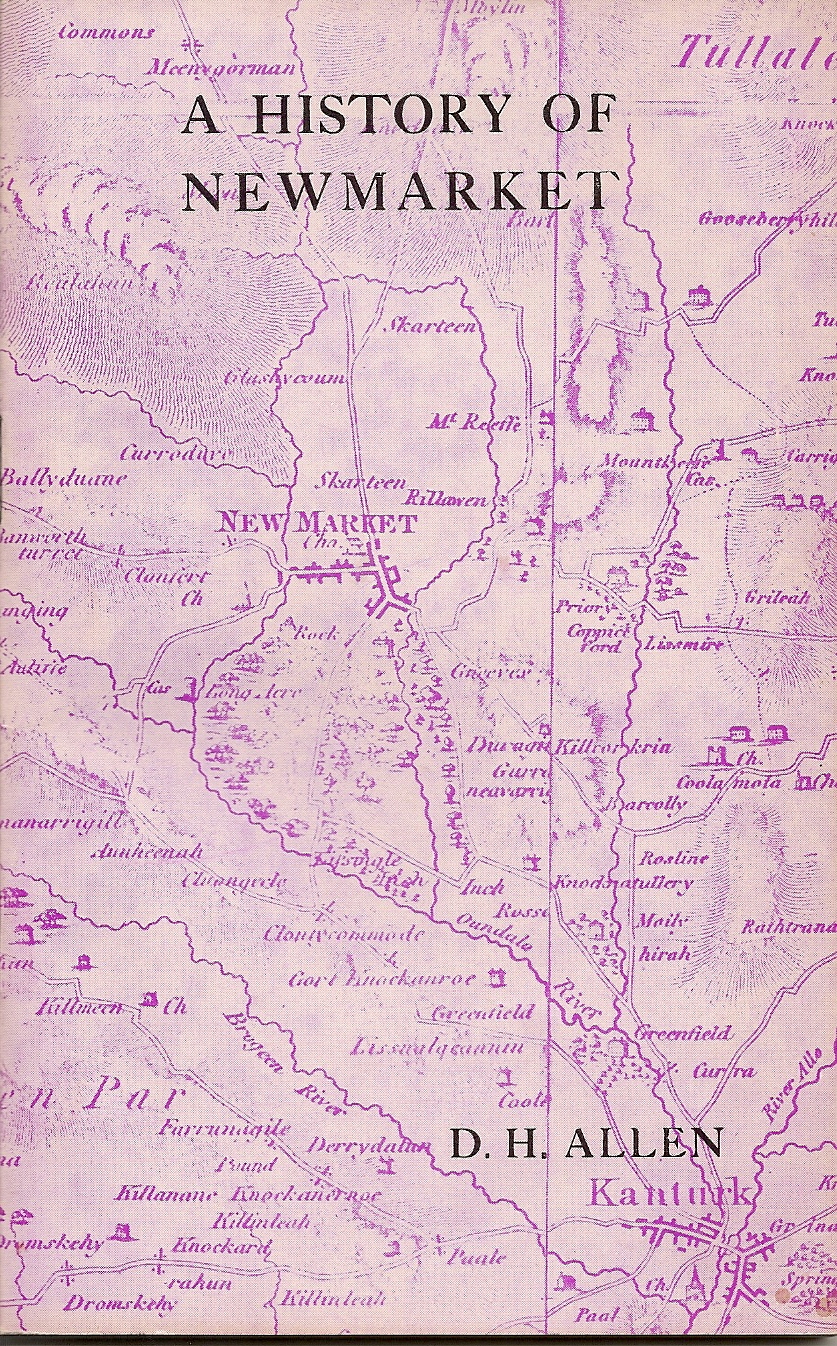 His father Jeremiah Sullivan (c. 1778-1848) was considered a prominent farmer.  Nothing is known about his mother.

Timothy’s siblings were Daniel, Dennis, John, and Mary.  By the time that Timothy was about age 30, all of his brothers had immigrated to Louisiana, USA.  Mary remained in Meenygorman and married William Cotter.  Their daughter Ann Cotter later married Timothy and Mary’s brother Daniel Sullivan.

Timothy married Ellen Sullivan (- 1889) also of Meenygorman.  Nothing is known about her parents.

Timothy and Ellen had four or five children, many or all of whom were baptized in the Church of the Immaculate Conception, Newmarket, Co. Cork, Diocese of Cloyne.

In 1847, Timothy and Ellen Sullivan along with their children — except for two — emigrated to Canada. They left Anne and Daniel with relatives at Meenygorman with the intention of sending for them once they were located in Montreal.

In less than a year, Timothy Sullivan was stricken by Typhus fever which was epidemic in Montreal.  He died in 1848, leaving his widow and children to fend for themselves.

Irish relatives not hearing from Timothy or Ellen began making written inquiries about their status.  When they were informed of Timothy’s death but were unable to locate Ellen and children, they concluded that they all had become victims of the typhus epidemic. 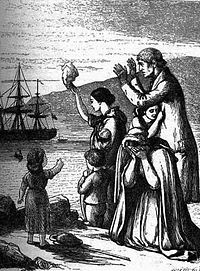 By early 1850, Timothy’s brother Daniel Sullivan already living in the United States set sail for Ireland and his hometown Meenygorman.   Thinking that his nephew Daniel and niece Anne were orphaned, Daniel made arrangement to bring them back with him to his home in Alexandria, Louisiana where he formally adopted them.

Ten years later in 1858,  Timothy Sullivan‘s wife Ellen surfaced and wrote to her daughter Anne who she had just discovered was a student at the Ursuline Convent in Galveston, Texas. 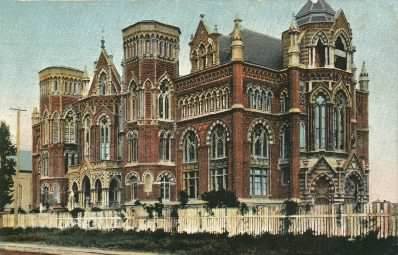 My dear children: [Anne and Daniel]

I do for the first time in my life take up my pen to address you wishing the same may find you in the enjoyment of good health as this leaves me at present, thanks be to God.

And pray I ask you what will I say, what will your Mother who has borne you in your infancy while she drew the sap of life, nay even your very existence from her bosom, who clasped you in her arms with a maternal fondness not to be equalled by any other than a mother who watched your sleeping form, your infantile angelic smiles, willing to lay down her life and her all sooner than have a hair of your head to be stirred & expected sooner or later to receive the like embraces from you.

But alas! My dear children how soon were those hopes blasted at the very time I was expecting my hopes to be realized. We were parted for how long, for eleven long years and I left in unutterable anguish with a broken, a troubled mind, sorrow not to be equalled, pining over the absence of my long lost children, lost to me but not to themselves, thanks be to God and their kind benefactor who has watched over you with a fatherly affection.

But I say again you were lost to me. My slumber was wearisome, the tranquility of my mind destroyed, nay nearly driven to despair was it not for that Almighty Providence, who watches with an all seeing eye over the orphan and the widow, strengthened me in my tribulation and at last brought tidings to me of where you are.

O children! O children! Am I ever to see you again? Am I ever to receive the fond caresses of my dear children? O happy would I be if I could see only one sight of you! It would inspire me with new life. O that God may send the day I will be thus blessed…

The markings you sent to your Aunt for me I have received and it was a welcome gift to me. You will doubtless wish to know how I came to know your address.

I was writing home constantly to my people and could get no tidings of you until I wrote to your Aunt Mary and she sent me your directions together with the Markings you sent her. Send me in your letter a lock of your own and your brother’s hair and let Miss Anne Cotter know her people are well.

No more but wishes to give my best love and respects to your Uncle and I remain your most loving Mother.

What kind of synchronicity occurred when Ellen’s letter read by her daughter resulted in Anne’s death from its sheer impact? 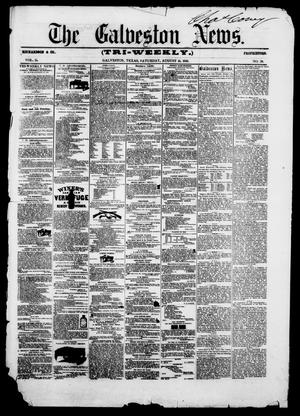 The following excerpt from the Anne Sullivan’s obituary was published in the Galveston News on July 31, 1858:

…There is another strange coincidence in the eventful life of this child [Anne Sullivan].  After entering the convent, conceiving herself an orphan, she repeatedly expressed a wish to her cousin, that she should die and be buried within the precincts of that holy demesne.

By dint of perseverance Mrs. Sullivan (Anne’s mother) it is supposed, some time in June, at last received a letter from Ireland in reply, stating that her daughter was in the convent in this city, and on the 1st inst., poor Anne received a letter, the first and only letter from her mother.  The news was too joyous for the extreme sensibility of this affectionate and truly amiable girl – she fainted and for more than half an hour, remained in a state of insensibility. On recovering herself she observed, “that letter has pierced my heart, it has killed me! Yes, I shall die and never shall see my mother.” To a naturally sensitive disposition, and possibly, some previously predisposed organic derangement, this gentle girl, after a few days of suffering from dysentery accompanied with fever, breathed her last.

The feelings of her uncle over the mound of his adopted child, must be imagined, for those, by whom they were witnessed, cannot describe in language, the tumults of his troubled breast. May He who watches o’er the good, pour His balm on the afflicted uncle and comfort the bereaved mother.

The oft expressed wishes of this amiable and pious child were complied with – her remains are interred i’n the modest cemetery of the Ursuline Convent of our city. 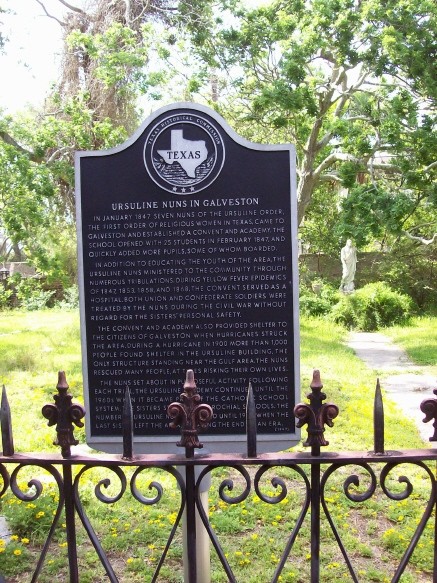 “In January 1847, seven nuns of the Ursuline Order, the first order of religious women in Texas, came to Galveston and established a convent and academy. The school opened with 25 students in February 1847 and quickly added more pupils, some of whom boarded.

In addition to educating the youth of the area, the Ursuline nuns ministered to the community thru numerous tribulations during yellow fever epidemics of 1847, 1853, 1858 and 1868. The convent served as a hospital. Both Union and Confederate solders were treated by the nuns during the Civil War without regard for the sisters’ personal safety…”

The year of 1858 was one of yellow fever epidemics and it possible that Anne was overcome both by fever and intense emotion.

Ellen Sullivan died in 1889 — 41 years after the death of her husband and 31 years after that of her daughter.   I understand that Ellen and perhaps her children are buried somewhere in Montreal, Canada.

The twist of fate in Timothy Sullivan’s life and family is seen in the impossibility of receiving written correspondence between family members due to epidemics (typhoid), war (civil), and distance (transatlantic).  During the Civil War (1861 to 1865) correspondence among Irish, Canadian and Louisiana families ceased and was not renewed. This led to many “dead letters.”

The undelivered letters led to isolation, adoption, and even death.  Thinking in terms of Jungian psychology, one could say that the archetype here is of the critical life-changing letter or call that never arrives or arrives too late.   What meaning can we make from these broken messages?

Parenthetically, this psychological pattern is somewhat repeated when Mary Sullivan Cotter dies only days after having her photograph taken to send to her daughter Anne Cotter in Texas.  Anne then receives this final photo in a letter informing her of her mother’s death in Ireland.

Sullivan-Clem Family Papers 1849-1956 located at the Daughters of the Republic of Texas Library, San Antonio 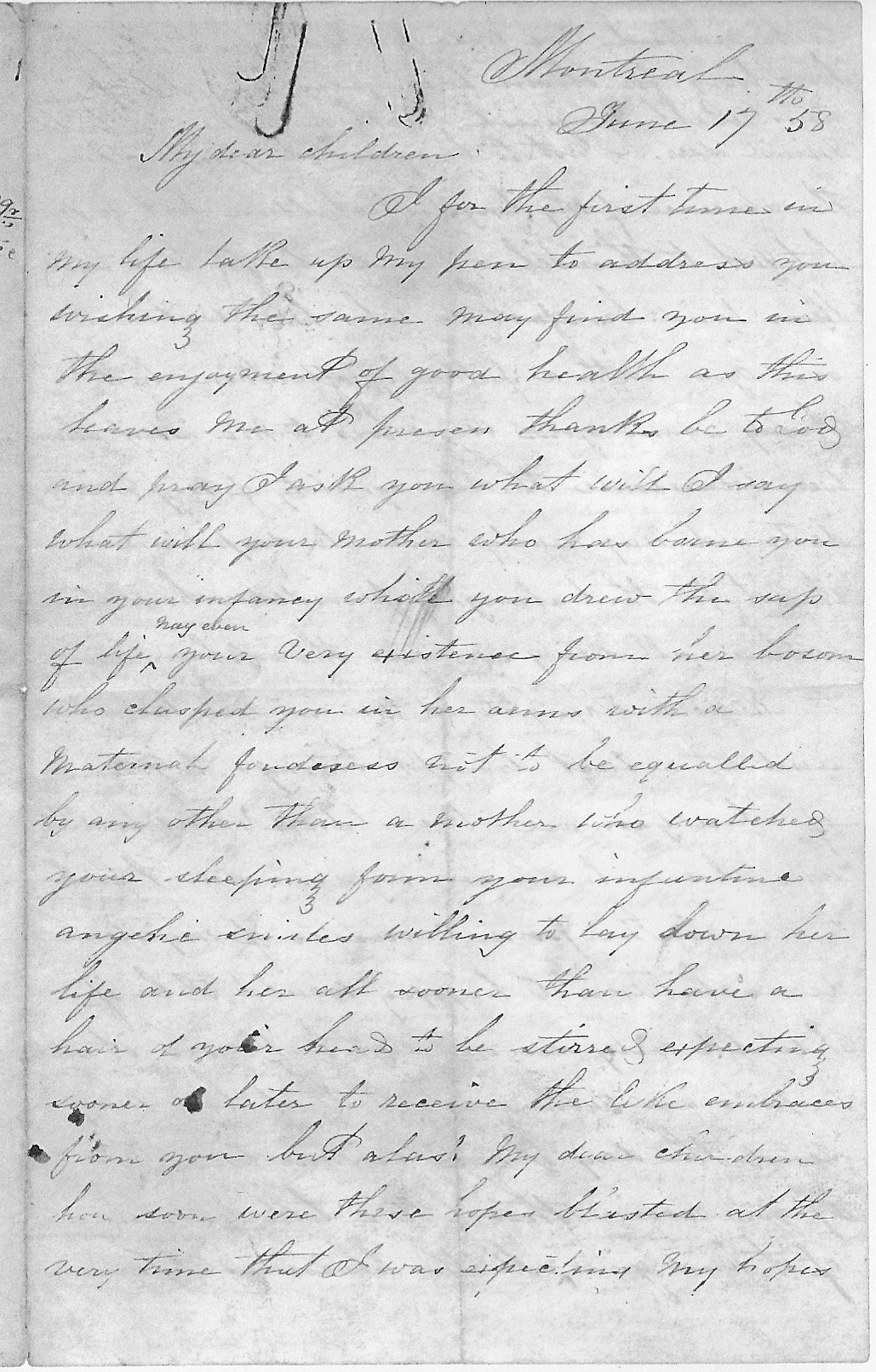 fateful letter from Ellen to her children Anne and Daniel