Owen (Ewyn), second Lord Ogle, of Ogle, Redesdale, and Bothal, Northumberland, England, knight, (c. 1439-1486) was born about the year 1439, as he was thirty years old when his father’s inquisition was taken.

Hodgson quotes ‘Cambden’s Remains,’ p. 66, to show that ‘Sir Owen Ogle’ is often written in Latin records Eugenius Ogle.   He says this Lord Ogle styled himself of Ogle and Redesdale, but apparently only till 1472 (or 1477 ?), when Harbottle and Redesdale were restored to Sir Robert, son of Sir William Tailboys.

Life events of marriage, war, and the ownership of lands of Owen Ogle are documented here:

Owen Ogle and his father on the 20th of October, 1465, dated a charter ‘at our castle of Bothal’ giving a messuage in Great Tossan to John de Murray, chaplain, they thus seem to have been the wardens of the heir and his lands, the heir being a minor, for on tile 20th of April, 1467, also at Bothal the same two leased a tenement in Morpeth to Thomas Spore. 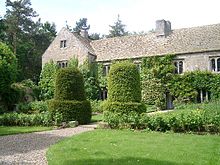 On the 1st of November, 1469, after his father’s death, Owen Ogle succeeded to the title and the estates, and on the 9th of March, 1471, gave to his uncle John Ogle the manor of North middleton near Angerton for life.

In the year 1480, the English besieged Berwick by sea and land in vain, but two years afterwards an army of 22,000 men, led by the earl of Northumberland, the dukes of Albany and Gloucester, reduced it.

In 1482, a lease of Norham was granted to Sir John Middleton by an indenture dated the 25th of March 22 Edward IV,  for which Ewyn, Lord Ogle entered into a bond.

In 1482/3, Owen Ogle and William Ogle of Ogle were on the inquisition post mortem of Dame Elizabeth Burcester, and his name occurs in the Historical Manuscripts as certifying a deed without date.

Owen Ogle appears to have had his first summons to parliament in 22 Edward IV, 1482.   But a licence to Owine Ogle, son and heir of Sir Robert Ogle, and Isabella, his wife, deceased, to enter upon his lands with a pardon for all contempts, is said to be dated in the time of Richard III.

But he seems also to have been summoned the first year of that reign, 1483, and the first year of Henry VII, 1485, in which year, on the 21st of January, he had settled the castle of Ogle and the demesne lands in trust on Guy Fairfax, justice of the King’s bench, and other trustees, the following being witnesses, Peter Middleton and Robert Manners, knights, John Harbottle, John Lilburn and Thomas Middleton, esquires.

The 31st of January, of the same year 1485, 1 Henry VII., Owen Ogle is mentioned in the inquisition post mortem of Humphrey, Lord Dacre, as holding lands in Thursby and Crofton, and again as Ewyn, baron, son and heir of Robert Ogle, knight, and John Swinburne releasing to Humphrey Lisle, esq., Felton, that which they had of the gift of Thomas Lisle, but Hodgson’s date is 3 Henry VII.

This grant was a release of the trusteeship given to his father and John Swinburne, 17 Henry VI.  Owen Ogle seems to have been on the Royalists’ side at the hard contested battle of Stoke near Newark against John, earl of Lincoln on the 16th of June, 1486, the date of which is often placed to the next year. According to some, Owen Ogle is the same that Polydore Virgil calls by mistake George.  Two years afterwards, he marched with the rest of the northern nobles, under Thomas Earl of Surrey, to relieve Norham Castle, then besieged by the Scots.

Owen Ogle may have been wounded at this battle and have afterwards died of his wounds, for his death occurred on the 1st of September following.   The inquisitions taken immediately after his death were not preserved, but one was taken at Bedlington on the 28th of July, 1492 (?) when Ralph, Lord Ogle, his son, was twenty-four years of age, and one was taken at Haltwhistle on the 30th of September, 1506, when it is stated he died possessed of Bothal, Weteworth, Newmore, Pegsworth, Hebburn, Fenrother, Tritlington, Earsdon, Longhirst Old Moor, Ashington, Hepple, Bikerton, Little and Great Tossan, Flotterton, and half of Trewhit, for the service of four knight’s fees, and that he died on the 1st of September, 1486, his son and heir, Ralph, being then eighteen years old.

Eleanor Ogle married secondly George Percy, esq., who on the 4th of July, 1491, with the Lady Eleanor, his wife, late wife of Ewyn, Lord Ogle, released to Ralph, Lord Ogle, all right in the lands which Eleanor held in dower.

By this marriage probably West Herrington and Windlestone in the county of Durham, came into the family.   On the 1st of July, 1513 (?)  Dame Eleanore, widow, and Robert, Lord Ogle of Bothal, granted lands in Ainwick fields to Thomas Tood (?), prior of Brinkburn.

MOVE The Hiltons were, it is said, settled at Hilton before the Conquest, and sprung from a Saxon maiden confined in a tower on the banks of the Wear in order to protect her from a Danish chieftain, who however, eventually married her.   Lancelot Hilton is said to have lived in the time of the Conqueror.   On the outside of the chapel of St. Katherine are a number of stone shields of the Hiltons and their alliances.   At Hilton castle is a shield with the Ogle arms emblazoned thereon.

According to the National Biography,

OGLE, OWEN, second Baron Ogle (1439P-1485?), eldest son of Robert Ogle, first baron Ogle [q. v.], and Isabel, heiress of Sir Alexander Kirkby of Kirkby Ireleth in Furness, though about thirty years of age at his father’s death in 1469, was not summoned to parliament until 1483 (dugdale, Baronage, i. 203). Ogle was present on the royal side at the battle of Stoke in 1486, and in 1493 or 1494 he, with other northern barons, accompanied Thomas Howard, earl of Surrey, to relieve Norham Castle, which the Scotswere besieging. There is no record of his being summoned to parliament after September 1485. By his wife Eleanor, daughter of Sir William Hilton, he left a son Ralph, who succeeded him as third Baron Ogle, and in October 1509 received a writ of summons to the first parliamentof Henry VIII. Ayounger brother of Owen, called John, was the founder of the Lancashire branch of the family settled at Whiston, close to Prescot; that branch was in the middle of the seventeenth century represented by an heiress, who carried the estate into the family of Case of Huyton; in their possession it still remains (gregson, Port/olio of Fragments, p. 183, ed. 1817).

On the death of Cuthbert, seventh lord Ogle, without male issue, in 1597, the barony fell into abeyance between his two daughters, Joan and Catherine. But Joan, who was wife of the seventh Earl of Shrewsbury, died in 1627. Thereupon Catherine, then widow of Sir Charles Cavendish, was by letters patent, dated 4 Dec. 1628, declared to be Baroness Ogle; and on her death next year she was succeeded in the ancient barony by her son, William Cavendish, in whose favour a new barony of Ogle of Bothal had been created in 1620. He was further created Earl of Ogle and Duke of Newcastle in March 1664 [see Cavendish, William, Duke Of Newcastle]. His son, by the famous Margaret, duchess of Newcastle, died without male issue in 1691, and the barony of Ogle is in abeyance among the descendants and representatives of his three daughters—Margaret, who married John Holies, earl of Clare, and afterwards duke of Newcastle; Catherine, married to Thomas, earl of Thanet; and Arabella, who married Charles, earl of Sunderland. Bothal Castle went to Margaret, and has descended to the Duke of Portland.

Owen and Eleanor’s only child: 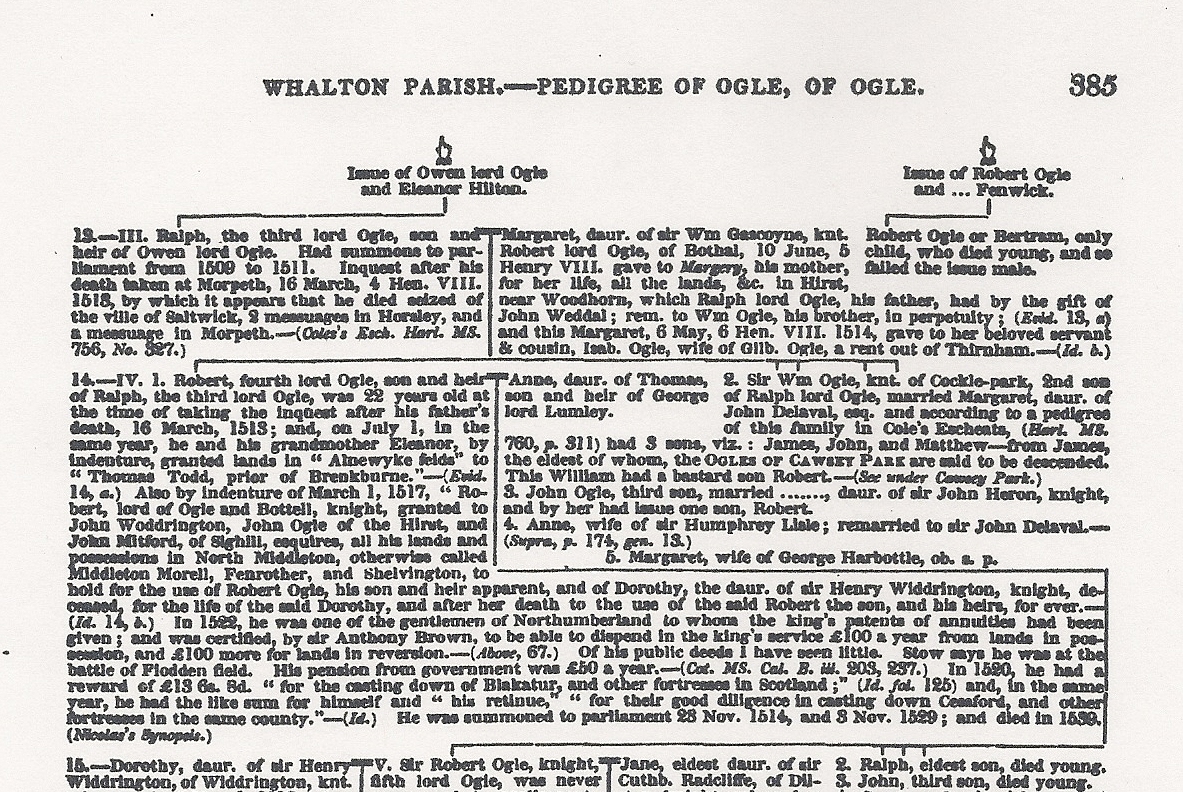